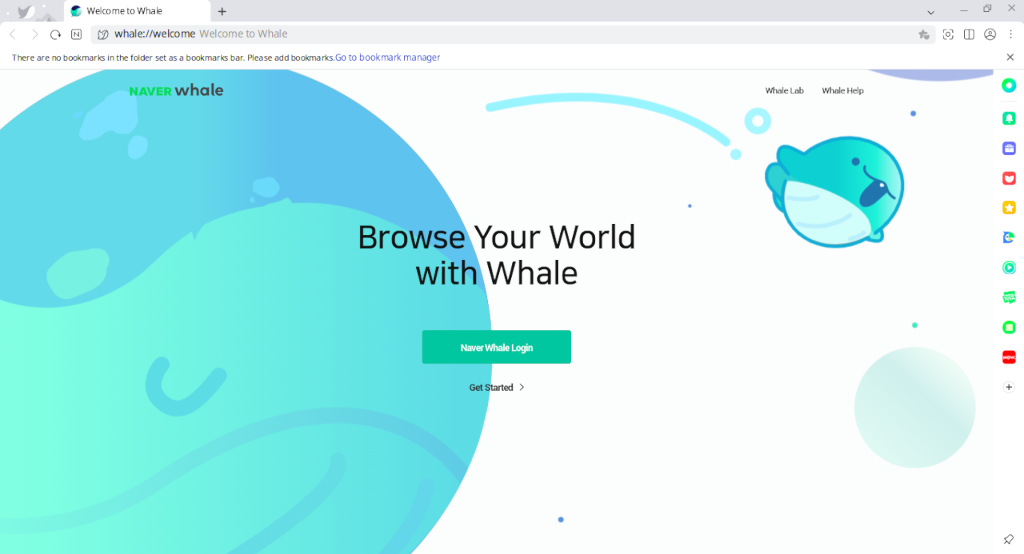 Surfing My Way. A Next Level Browser.

There are many browsers based on Chromium like Google Chrome, Microsoft Edge, and Samsung Internet, to mention a few. Of all that I have tried, there is one I only recently discovered and immediately fell in love with, Naver Whale (네이버 웨일).

Naver Whale (네이버 웨일) is a multi-platform Chromium-based browser developed and launched by the Korean company Naver (네이버) in 2011. It is available in English other than its native Korean language and is actively maintained.

Installation is very simple, download Whale (웨일) from the official website and install the browser. The official link will automatically detect the appropriate operating system installer file to download.

These are the unique features that comes with Naver Whale (네이버 웨일).

Dual-pane tab is a cool feature in Naver Whale (네이버 웨일). A single browser tab can have two panes to give the user more freedom in viewing content side-by-side. There are two modes: linked and unlinked.

In linked mode, clicking an active link on the left pane will open it on the right pane. This is very useful when reading or doing research. Instead of switching between tabs, the user can check the referenced document with ease.

In unlinked mode, the two panes work independently of each other. Any links clicked on either pane will open on itself; or a new tab entirely (if desired).

It is also possible to merge two tabs into a single dual-pane tab. This is useful when sharing content in an SNS platform.

Notice is a sidebar built into Naver Whale (네이버 웨일). It shows the notifications and updates related to the user’s Naver (네이버) account. It is basically an easy access removing the need to open a dedicated tab.

This is a very useful sidebar section Naver Whale (네이버 웨일) have. It offers easy access to common tools like a calculator, exchange rate conversion, units conversion, and even to see the latest in the stock market.

Scrapbook is, by the name itself, a scrapbook for quickly saving information. Compared to a regular memo or note taking app or extension, Scrapbook automatically categorizes saved information into notes, links, images, videos, and files which can then be accessed anywhere, like a mobile phone, a desktop PC or laptop, and through a web interface. If Mozilla Firefox have Pocket, Whale has Scrapbook.

It is also possible to further place information into more specific topics by creating new categories or tags. One cool feature of Scrapbook is the ability to connect another service which has to effect of auto-saving items or links by simply clicking Like or Watch Later or Wish List. Currently supported are Naver TV and Naver Keep; while Naver Shopping, and YouTube were recently disabled pending an update.

This built-in feature also offers website translations. A flag icon will show up at the extensions bar when a site is in a language other than the default language set in the browser. If the browser is in English and a website is in another language, if Naver Papago (네이버 파파고) supports the language the icon will appear. The power of neural translation right at the user’s fingertips.

With the Naver Webtoon (네이버 웹툰) sidebar app, users can easily check the latest webtoon episodes; the rankings; and discover new ones.

The Memo sidebar app is useful for users of the Naver Memo mobile app. It give users an easy way to access their notes across devices.

Naver Now was formerly known as Naver TV, the one place to watch live shows of K-pop acts, chat in real-time, and interact with fellow fans. It is focused more on a more professional production, like any usually seen on TV.

If Naver Now is focused on professional production of live performances, VLive is the platform for artists to interact with their fans, be more casual, and provide any content they can think of. On top of the free and no-IP restriction basic service, celebrities can choose to offer paid content through the service’s different tiers.

VLive is similar to services like Kumu, Chums Live, and Bigo Live but for established names in the industry. In addition, what makes this service more unique from other platforms is that fans can submit subtitles for the videos or past live streams.

A good feature of Naver Vibe (네이버 바이브) is its use of artificial intelligence when creating music recommendations to its users instead of the traditional charts. The service also does not offer a monthly subscription fee, rather, users pay for the songs they want to listen to.

The Whale (웨일) media control center is a built-in feature which displays all the active (playing or paused) media from any tab, extensions, and sidebar app. As shown in the screenshot above, it provides control for three active media recently played during the browsing session.

Naver Whale (네이버 웨일) is a very good alternative browser for Google Chrome, Microsoft Edge, and other popular Chromium-based browsers like Opera and Vivaldi. Whale (웨일) is geared toward ordinary users and professionals who prefer to have an out-of-the-box experience where the tools they need are but a click away.

It is currently my default Chromium-based browser, and the services offered by Naver (네이버) are quite useful.

This article has been syndicated to: mastodon.social, twitter.com, www.facebook.com
Share on