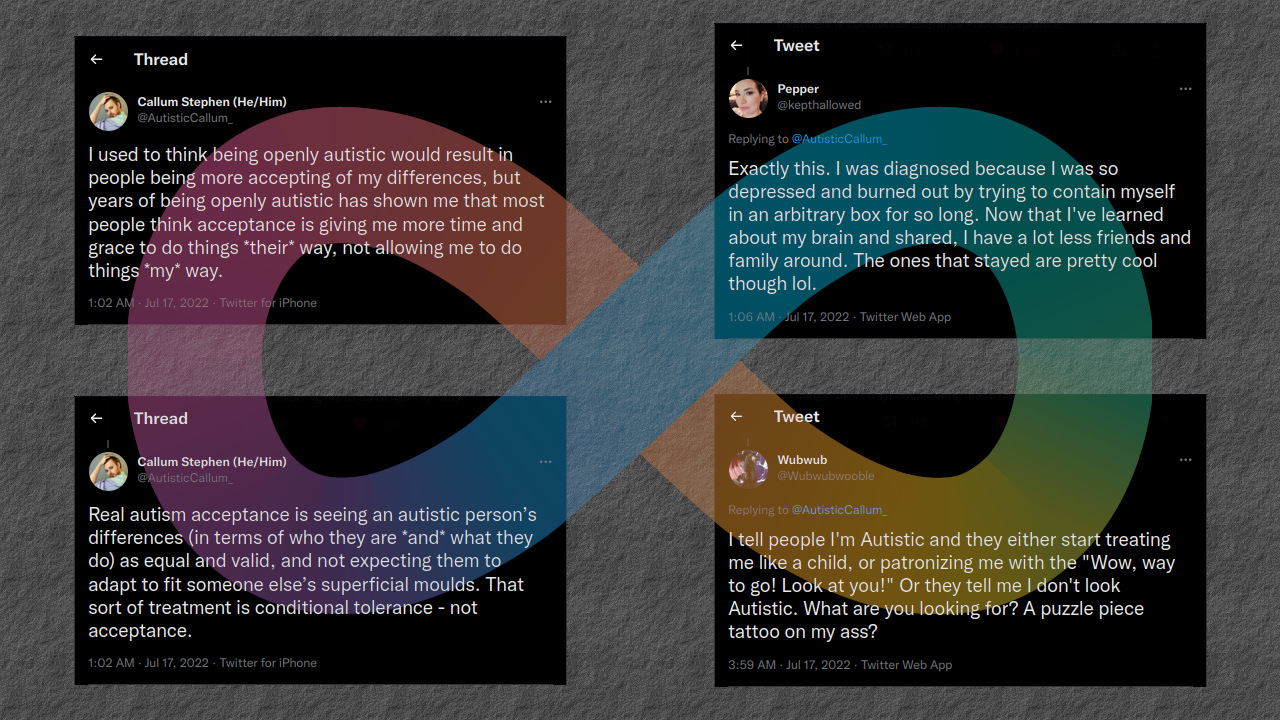 There is an on-going show entitled Extraordinary Attorney Woo (이상한 변호사 우영우) which tackles the challenges, discrimination, prejudices, and stigma autistics face on a daily basis. However, it is not possible for them to touch on every single topic, it is not a documentary after all.

How else can we let neurotypicals understand autistics? Social media, social networks. Here is one such important thread, a discussion about what a real autism acceptance is.

Earlier today, Callum Stephen shared his experience on being openly autistic and how he realized that many are not actually accepting him as autistic rather it was only a conditional tolerance.

What does it mean to be openly autistic?

Is there a non-openly autistic?

Yes. This is the, sadly, default for majority of autistics. Autistics learn to mask and create different versions of themselves to blend in, to fit in, to be accepted in society. For the past years, more people are coming out that they are autistic. This is not easy considering how there are discrimination, prejudices, and stigma about autism and autistic.

Even in a private workplace, in some countries they can get benefits from it too, autistics do not disclose it (if possible) because it is scary to share this information. The main issue? Acceptance.

What is real autism acceptance?

If ableism is a new word for you, the Oxford Languages described it as discrimination in favour of able-bodied people.

And here is Callum Stephen’s reply:

Mandie also has this to say:

I hear an argument that there are a lot of people who are accepting of autistics. There are almost 8 billion people in the world and it can not be “very few”, right?

We know for a fact that awareness about autistic is very minimal in our respective countries. Awareness is one thing, knowledge and understanding is totally another.

So, where are the 800 million people who are accepting of autistics? Spread far and wide … thin. A portion is probably in areas where there is a strong autism awareness and autism acceptance programs. The rest? Here and there. Consider also the probability of encountering these accepting individuals. How frequent? Are they in the workplace an autistic is employed? What is their rank in the office hierarchy? How about in public transportations?

If we look at it from a correct perspective and context, yes, there are indeed very few neurotypicals who accept autistics for who they are, an autistic.

What is the autistic way of doing things?

This is a very good question asked by Lunaria:

I can relate to that myself. There was one time when an employer wanted to give me an award and they want me to attend a corporate event to receive it. I told them I do not want to, someone can just receive it on my behalf. For me, it takes a lot of preparation to attend events. At that time, there were many things going on in my life there simply was no time to prepare myself to attend such an occassion.

I have to prioritise where I spend my energy on, and that time the event and the award was not worth it. I do appreciate and am thankful for it; and I have attended corporate events before. What neurotypicals does not see is the mental preparation required.

Think of it this way: an autistic who is not good at socializing, is drained by noises (loud at that), the crowd (and proximity), and so many other things happening, is going to attend a social function with all of the things that person dreads. Even if an autistic prepared for it in advance, it does not mean we have enough energy to keep ourselves afloat or functioning. Some of us do things no one notice to extend our stay just to be socially acceptable and not considered rude or a killjoy. But deep inside, we want to bolt … now now now.

This is what real autism acceptance means. Accpeting autistics for who they are without any conditions and expectations, and not because one is simply tolerating the traits and quirks of an autistic.

Do we enjoy hiding ourselves? Do we enjoy regularly keeping our masks on and keeping track of which mask is appropriate for a given situation? No and no. It is draining. It is lying to ourselves. It is not right. But many of us are not openly autistic, are not disclosing we are autistic, because of the discrimination, prejudices, and stigma about autistics and autism to this very day.

There are also a lot of undiagnosed and suspected autistics but they do not want to get a diagnosis for the exact same reasons, some of them need support or need to understand why they kept on doing things people are telling them as “childish” or “rude”. Because of the discrimination, prejudices, and stigma, they do not want to have anything to do with autism, or any psychological evaluation for that matter.

We are halfway through 2022. Let’s change this. If you are a neurotypical reading this, let’s help each other. Learn more about autism through the eyes of autistics. If you hear people making jokes about autism, or something autistic, or any other disorder, tell them it is not a matter for them to make jokes. Simple yet it can make an impact.

This article has been syndicated to: mastodon.social, twitter.com, www.facebook.com, t.youronly.one